Scan at the box office and concession stand to:

Jurassic World: Dominion — Everything You Need to Know

Dinosaurs roam the Earth once again, and after the events of JURASSIC WORLD: FALLEN KINGDOM, the genetically recreated dinos are no longer contained to a remote island. The second movie in the JURASSIC WORLD trilogy ended with dinosaurs roaming out in the wild, and Jeff Goldblum's character Dr. Ian Malcolm proclaiming the beginning of a Neo-Jurassic Age.

Here's the latest trailer for JURASSIC WORLD: DOMINION, which features the reunited cast of JURASSIC PARK and the returning stars from the last two JURASSIC WORLD movies — and that's before we even get to the dinosaurs!

You can also watch the first few minutes of JURASSIC WORLD: DOMINION, which is a prologue that takes place millions of years in the past, during the original reign of the dinosaurs. 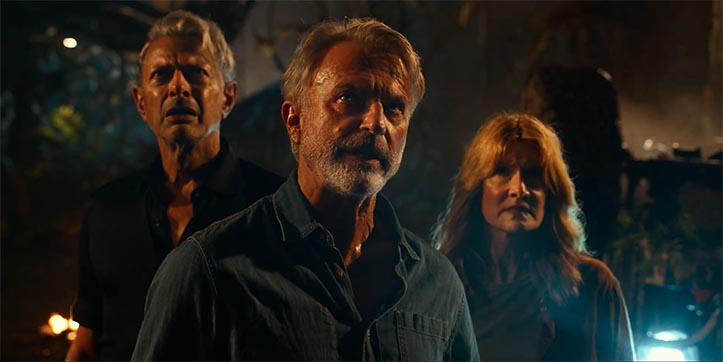 The biggest news about the JURASSIC WORLD: DOMINION cast is that Laura Dern and Sam Neill are returning to play their characters from the original JURASSIC PARK. Dern's Dr. Ellie Sattler and Neill's Dr. Alan Grant are part of the story — just as Jeff Goldblum's character Dr. Ian Malcolm returned for FALLEN KINGDOM. (He's in DOMINION, too.)

The Story in Jurassic World: Dominion 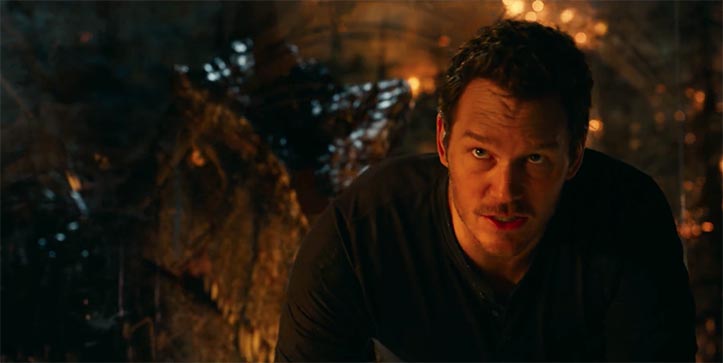 What is JURASSIC WORLD 3 about? While we don't know the full storyline (and wouldn't want to at this stage!) director and co-writer Colin Trevorrow has discussed some of his ideas. Perhaps the most important is that, while dinosaurs do exist out in the wild thanks to the events of the last movie, we shouldn't expect a monster movie where angry dinos attack a city.

He told Jurassic Outpost, "The world I get excited about is the one where it’s possible that a dinosaur might run out in front of your car on a foggy backroad, or invade your campground looking for food. A world where dinosaur interaction is unlikely but possible—the same way we watch out for bears or sharks."

Seeing a guy on a scooter chomped by a dinosaur in the latest trailer, we believe that he has followed up on these ideas in a big way.

One big thing in the new JURASSIC WORLD: DOMINION trailer is the revelation that Blue, the Raptor trained by Chris Pratt's character in JURASSIC WORLD, has had a baby. So not only are dinosaurs roaming free, they may be able to breed.

In the previous JURASSIC PARK and JURASSIC WORLD movies, dinosaur breeding has been a pastime for only a very few. Trevorrow suggests that as the animals — and their DNA — have escaped out into the world, their genetic code has gone "open source." Or, as Trevorrow put it to Wired back in 2015, "What if there are 15 different entities around the world who can make a dinosaur?"

While there's a whole lot we don't know about JURASSIC WORLD: DOMINION, one thing is very clear: both the second and third JURASSIC WORLD movies were conceived with one another in mind. In 2018, FALLEN KINGDOM director J.A. Bayona told Empire that, when working on his movie, they realized some moments were "more like a Jurassic [World] 3 scene." Those ideas were held back for DOMINION, because "Some of those scenes we thought were better seen in a world where dinosaurs had spread all over the world."

Trevorrow also told Empire that the idea of the second movie was "to show that the equilibrium has changed for the characters and for the world." Following that film, "nothing will ever be the same," but there's "the promise of us being able to take this into a place that is truly exciting and something that we haven't seen before. I have a dinosaur movie that I've always wanted to see, and it took two movies to earn it."

Making a Monster Movie During a Pandemic

DOMINION began shooting early in 2020, just before Covid precautions caused production to shut down. JURASSIC WORLD 3 was also the first major studio production to get back to work in July 2020. Universal's Donna Langley said, "As we continue to contend with the challenges facing our industry during a global pandemic, the collaborative nature of this production allowed us to safely complete nearly 100 days of shooting, and we are so proud of what this team was able to accomplish."

The cast lived together in a "bubble" during production. Director Colin Trevorrow said, "I think that close proximity to each other has made the movie better. Everything we were going through emotionally we would share. We would rehearse on Sundays, we crafted the characters, which made the emotion of the film richer. I think the movie will be stronger for it."

All images courtesy of Universal Pictures.

Pearl: Ti West and Mia Goth Made a Surprise Prequel to X

Black Adam: What Is the Justice Society of America?

Get email updates about movies, rewards and more! Subscribe to our emails

Get email updates about movies, rewards and more!

Your Browser Location May Be Disabled

Allow Cinemark to get your location by enabling location services in your browser settings.